Ti trovi in: Bologna > THINGS TO DO > Bologna Food – What to eat in Bologna – Best five typical dishes

Visiting Bologna just remember: cooking in Italy is an art and you are in a city full of masterpieces. Bologna is mother to many typical Italian dishes.

It is said that cuisine has evolved at the same time as the university, the oldest in Europe, and has get the influences of those visitors who already populated the city in the Middle Ages. Walking through the streets of Bologna city center, you will find a lot of shops with typical Emilia-Romagna products. Cheese & Salami fill the showcases but the main protagonist is definitely the fresh egg pasta. Many restaurants in Bologna offer some Tigelle as Aperitivo to match the good wine.

There are many typical dishes in Bologna. In this post, our guide will tell you about the five dishes you should definitely try. These are the flavors that characterize the territory and that came from a long tradition. Today this Emilian city is considered by many people as the Italian capital of good food. 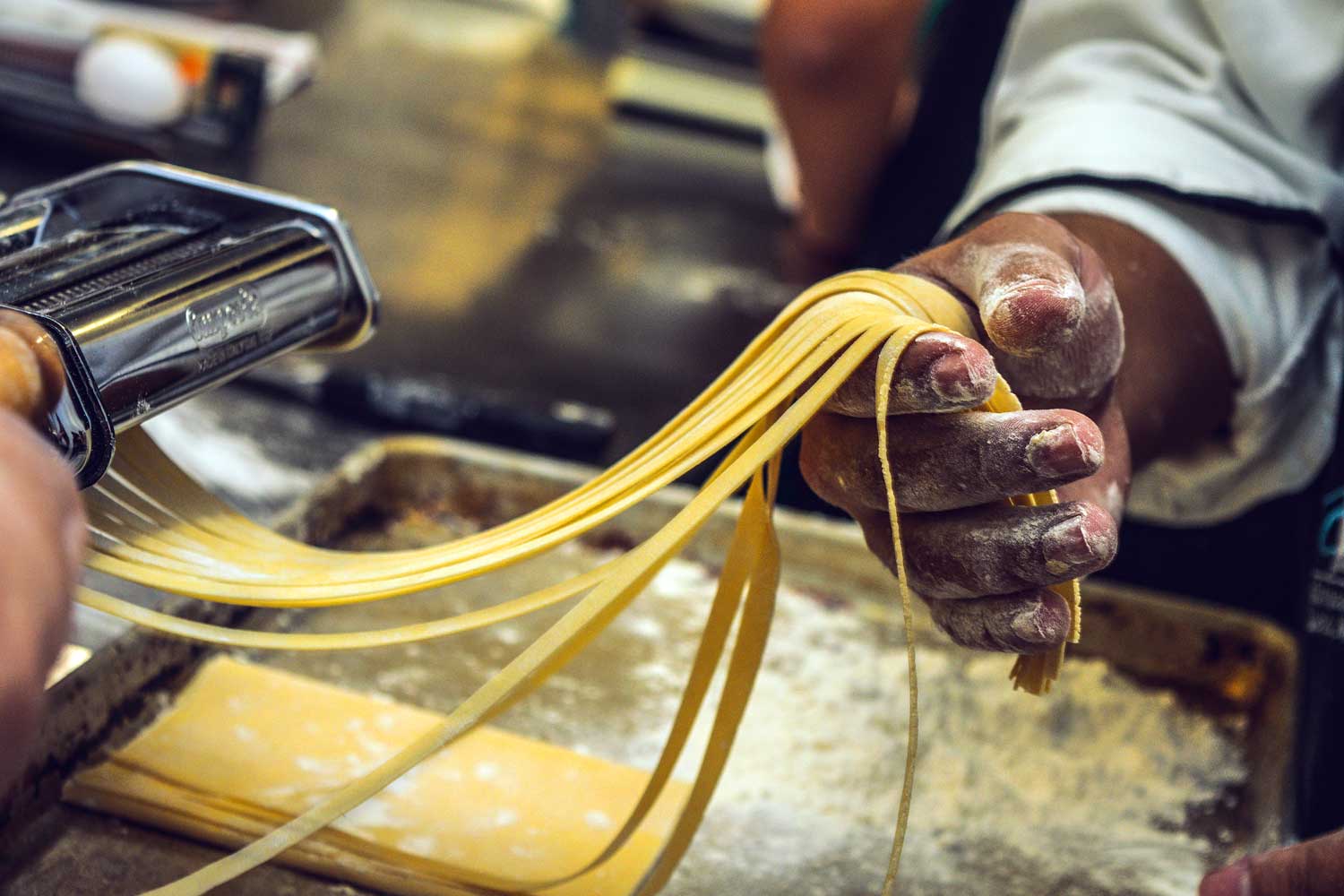 Learn How to cook the Typical Bologna Food!

1. Tortellino, the prince of Bologna Food

The Tortellino is certainly the most famous of the typical dishes of Bologna and can be found in most restaurants. If you want to eat as a local, ask for a plate of Tortellini in broth. They are often served in other ways but the traditional one are with broth.

According to the original recipe, Tortellino is prepared by making a fresh egg pasta with a filling of meat and cheese, all strictly of Emilian origin.

The goddess's navel to eat good and beautiful

Culture and food in Bologna blend perfectly, Tortellino is the best example. In fact the legend tells that Venus, goddess of beauty, was staying in an inn near Bologna. Just on this occasion, the innkeeper saw the beautiful woman while she was asleep and he got her perfect shapes.

The innkeeper was so fascinated that he ran into the kitchen and laid the pasta. So he created the Tortellino inspired by the shape of the Venus navel. Although today it is very difficult to see Venus turning around the streets, Bolognese continues to shape the fresh leaf and fill it with the same care of a time.

Of course the most famous dish, Tagliatelle al Ragù are now part of the cliché on Italian cuisine. before continuing it is necessary to dispel a myth: the Spaghetti Bolognese. Sorry to disappoint you if you thought coming to Bologna and try this dish, but the spaghetti bolognese not exist. The Spaghetti Bolognese, often found in restaurants of other countries, is just a bad copy of the Tagliatelle with ragù sauce. 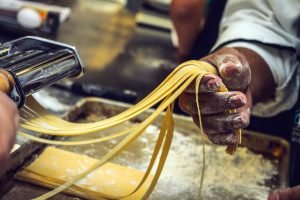 So let’s see the differences starting with Tagliatelle. The Ragù sauce is not just a sauce with meatballs, but its recipe is more complex than you might think. First of all you have to use a mixed ground of beef and pork that is cooked for about two hours. Among the ingredients we also find milk, butter, white wine, carrots, celery and onion. So you understand that in Italy the cuisine is a serious matter! Controversy aside is to say that the Tagliatelle have left the mark on who has tried them. Their origin is commonly attributed to the chef Zefirano who would model her to imitate the blond hair of Lucrezia d’Este in occasion of her marriage.

Lasagna is one of the traditional Italian dishes, now famous and popular all over the world. If you have already tried Lasagna and enjoyed it (of course you do!) you should definitely try this regional version.

Green Lasagna are a traditional dish of Emilia Romagna and in particular of the city of Bologna. Do not be fooled by the addition of spinach, this is not a vegetarian dish! Ragù and bechamel are essential to prepare this delicious dish.

The salami most appetizing and characteristic of our town is the Mortadella. The What in Italy is known as Mortadella in other countries is famous as Bologna sausage.

In fact, this salami is so tied to the image of the city that abroad has lost its original name. Such name appears to be of ancient origin, even Roman. In fact, mortar was the tool with which pork’s parts were chopped before being mixed with lard, spiced and then make sausages.

However, the very important thing is the rich and intense flavor of Mortadella, let’s remember that the IGP brand (protected geographical indication) protects its origin. Try the one of Bolognese origin, a good place to find it is the area of the Quadrilatero. 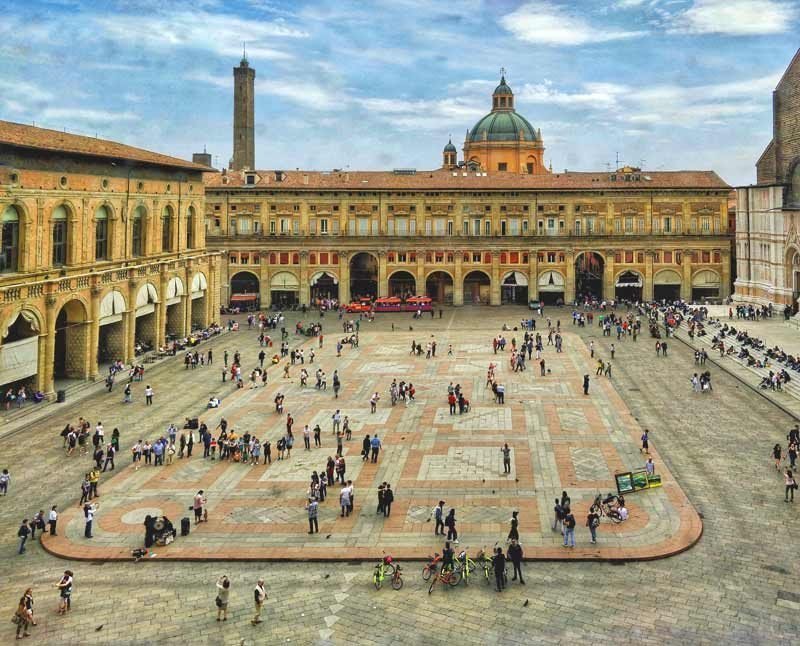 5. The Bologna Schnitzel or Cotoletta Petroniana

To complete the culinary tour can not miss the Bologna Schnitzel also called Cotoletta Petroniana in honour of San Petronio, the patron saint of Bologna.

This is a real explosion of taste, veal or chicken is breaded in the egg and fried. It follows the baking in the oven with a spoonful of meat broth, a slice of ham and Grana cheese shavings .Absolutely the favourite dish of those who love strong tastes.

These are just the top five traditional Bologna food

Here we have illustrated only the best five traditional dishes but remember that Bolognese cuisine is full of delicacies.

In many restaurants you will find variations and customizations created by the chef’s experience and many other tasty foods to try. That’s why we suggest you never stop, Bologna is a city that can give great surprises to those who love good food.