Ti trovi in: Bologna > WHAT TO SEE > 5 villages to visit near Bologna

By now you already know what to see in Bologna and now you want to dedicate yourself to the beauties that are in its vicinity?Here we have what’s right for you!

A short distance from the capital of Emilia you can visit five unmissable medieval villages. We are sure you will enjoy discovering these places that you will realize are precious pieces of your journey.

Turn into explorers and enter with us through the narrow streets of these charming villages.

You may also like: 22 thing to do in Bologna

The 5 most beautiful villages to see near Bologna

The city is dotted with small hidden gems in its vicinity, ancient fortresses, fairytale landscapes within natural parks. So we decided to talk to you about the beauty and uniqueness that we consider the 5 most beautiful villages to visit near the city Felsinea.

Dozza is a small village castled on a hill where stands the impressive Rocca Sforzesca. The village has just 1000 inhabitants if you do not consider the characters imprinted on the walls of the city that animate the streets, they are the true soul of the city.

In fact Dozza is a real open-air art gallery, there are more than a hundred paintings made on houses and shops that will accompany you through the paths of this fascinating jewel. It all started with the Biennale del Muro Dipinto which, thanks to the participation of hundreds of contemporary artists, has transformed Dozza’s houses into so many works of art since the 1960s.

The Biennale takes place during the first days of September, in odd years, and on these occasions it is possible to see the artists at work with their murals.

After having fully enjoyed the beauty of the streets it is certainly worth stopping at the Rocca Sforzesca, site of medieval origin. Here is also a small art gallery where you will find works in time detached from the walls for conservation needs as well as several sketches, do not miss the visit to the towers and prisons. Wine lovers will be pleased to know that the Rocca is also home to the Regional Enoteca, so we suggest you finish your tour with a good glass from the surrounding vineyards.

To visit this village means to get lost in the streets and live a surreal experience to try at least once in your life.

2. Brisighella and the three guardians

The only approach to the medieval village of Brisighella will transport you back in time, immediately appear imposing the three rocky pinnacles, called three hills, which overlook the small town, each with its own “guardian” to watch over it.

One of them is the Rocca Manfrediana located on the second of the three pinnacles, built in 1300 by the Manfredi family, lords of Faenza, and passed over the years also in the hands of Cesare Borgia and the Venetians undergoing various modifications and extensions.

The visit to the fortress is really suggestive, inside there are several educational paths with narrating voice and music that will lead you during your exploration. But it is in the walk on the walkways of the fortress that time stops and you just have to admire the village from above.

If you want to be accompanied by ladies, knights, artisans and late medieval soldiers, we suggest you make your visit in June, the month in which the fortress turns into an enchanted castle with detailed historical re-enactments.

Starting from the Rocca you can enjoy a beautiful landscape surrounded by beautiful vineyards and walking until you reach another Guardian: The Clock Tower. The tower was born as a fortress and was built by the commander and politician Maghinardo Pagani Da Susinana in 1290, initially had a defensive function, in 1850 it was completely rebuilt. On this occasion the clock was added, which has the distinction of having only six hours in its dial.

It’s time to get to the heart of the city. Piazza Marconi immediately strikes for the small houses that surround it. These stand out for their bright pastel colors but also keep a secret, to understand it is enough to approach. Spill out from the arch-shaped windows that overlook the square, inside them you will see the ancient covered and elevated road called Via degli Asini.

The road was built in the fourteenth century with defensive purposes and then was later covered and incorporated by surrounding homes and used mainly by birocciai and their donkeys for the transport of gypsum, coming from the quarries near the city, the road takes its name from these animals.
For the adventurous peoples it is important to know that Brisighella is located in the  Parco Regionale della vena del Gesso. Here you can have awesome excursions and not far from the Brisighella there are fascinating caves that can be visited.

The enchanting medieval village of Scola dates back to the fourteenth century and is one of the best preserved of the Bolognese Apennines. Visiting it feels immediately transported to another era and seems to have reached a secret place. The name of this small town tells us a lot about its history, in fact it would seem to indicate a watchtower and this is precisely the purpose with which it was born, the position made it a great defensive bulwark.
By the Comanicini Masters, towers and other defensive buildings were transformed into dwellings over time.

We suggest to get lost in the streets of the village and go hunting for the various symbols left by these famous builders and artists on the walls of the houses. To make this hunt even more enjoyable there are the various arches on the way, the doors and windows decorated with coats of arms, pergolas and many other architectural features.
A building not to be missed during the visit is the Oratory of San Rocco built in 1481 with blocks of sandstone, a real rarity. Also worth mentioning is the fourteenth-century Casa Parisi, which belonged to the family that owned the village until 1700, a period in which the sundial with which the façade of the building was embellished dates back to. Right here now stands a small museum dedicated to the territory and rural life.
This enchanted city is guarded by a centennial cypress that has become a real monument of the town.

4. The tiny village of San Pietro

The tiny village of San Pietro, immediately striking for its small size, is located on the edge of the beautiful Parco Regionale dei Gessi Bolognese. San Pietro, like other medieval villages in the area, was born with strategic and defensive functions, the Castle of Uggiano was a proof, it is a pity now it is only possible to imagine its greatness. Nothing remains of the castle except an important witness: the Tower (XII century) used as a bell tower and recently renovated. The importance of the tower can also be understood from the fact that in 1881 it became a municipal coat of arms meaning that it was therefore considered a symbol of the city.

Another building from the Middle Ages left to tell us about the history of this tiny village is the Church of San Pietro which enclosed the walls of the castle together with the church of San Lorenzo, now disappeared. The facade of the church was redone in 1929.
The last witnesses of the ancient village are the two fountains that rise not far from the church, called Fontane Delle Armi.
Who at the end of the visit was hungry should not be afraid, the village in fact houses an old tavern where you can enjoy excellent dishes of Bolognese cuisine.

5. Monteveglio Antica, the impregnable stronghold and its abbey

In the past, Monteveglio was considered one of the most important strongholds in the area, the tower and the abbey that rise to the top of the hill where the city is located bring to mind an era of clashes and sieges. Here is the ancient part of the city, the jewel that we recommend you visit.

on the top of the hill, at the entrance we can see the embattled arched door and the castle tower which are what remains of the original fortress. It was here that Matilde Di Canossa succeeded in resisting Emperor Henry IV thanks to the impregnable stronghold. Inside the tower there is now an interesting documentation center on the history of the territory.

Continuing along the cobbled street we meet historic buildings up to the ancient Abbey of Santa Maria. The imposing Romanesque building was built by Matilde di Canossa to celebrate her victory, which dates back to the 12th century. The abbey stands on the ruins of an even older site where you can see the traces by visiting the beautiful crypt where there is a holy water font from the Longobard era. 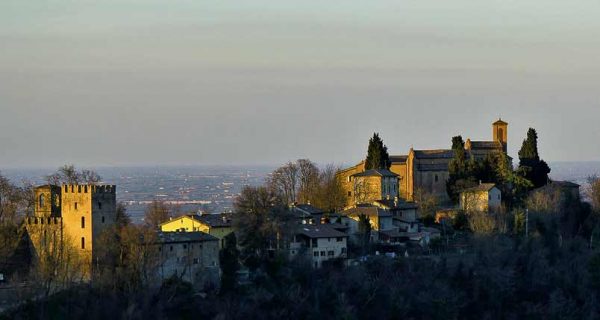 We suggest you close the exploration with the fifteenth-century cloister with double loggia, one of the two cloisters of the church, unfortunately the oldest remain only ruins.

For those who love getting lost in nature it is important to point out that the village is located in the regional park called precisely the Abbazia di Monteveglio, so it is a duty to take one of the many suggested trails and go to the discovery of the fascinating protected area.