Ti trovi in: Bologna > WHAT TO SEE > The Archiginnasio, the best palace to visit in Bologna

The palace of Archiginnasio is a necessary stopover for any tour of the Old Town.

The Achiginnasio is a wonderful palace that deserves to be visited. Its construction dates back to the sixteenth century for papal wishes, commissioned by Pope Pius IV. Its purpose was to bring together all the activities of the University of Bologna in one place. Since 1563, the year of its inauguration, the Archiginnasio hosted the university lessons that before were divided in various locations. Only in the 19th century didactic activity ended and in 1838 it acquired the function of the municipal library, now the largest of Emilia-Romagna. 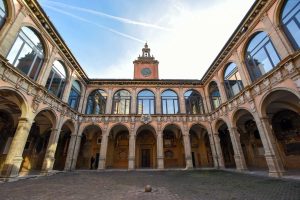 The unforgettable attraction of Archiginnasio is definitely the Teatro Anatomico. This amphitheatre-shaped hall was built on the design of Antonio Levanti. Just entering the Anatomical Theatre will take you back in time, between the coffered ceiling and the fir-tree walls seem to echo the words of the ancient speakers. In fact, to spearhead the twelve statues of famous doctors appear the figures of Hippocrates and Galen. But to make the visit memorable is the shocking Cattedra degli Spellati. This woodcut is made famous by the figures of the Spellati, the two statues representing men without skin made on the design of Ercole Lelli.

The hall of the Stabat Mater takes its name from the work of Gioachino Rossini.

This reading room with beautiful decorations was known only as a magna classroom. But on March 18, 1842, there was the first performance of the Stabat Mater; from that day the hall took the name of Gioachino Rossini‘s work. Absolutely not to be missed for the elegance and refinement of frescoes is considered one of the most representative area of the ancient Bologna university. Closely related to the history of Bologna, the Stabat Mater room is one of the major points of interest of Archiginnasio.

The Palace of Archiginnasio has the largest heraldic collection in the world.

Bologna is a record-holder city and Archiginnasio holds a very special one: the largest number of heraldic walls in the world. Form 1700 to today more than 6,000 coats of arms were placed to decorate the corridors and classrooms of this palace. The purpose of coats of arms was to give glory to the headquarters of the University of Bologna and today represent a unique heritage of its kind.

The Archiginnasio is in Galvani Square, just a few steps from the Church of San Petronio.