Ti trovi in: Bologna > WHAT TO SEE > Piazza Maggiore and the best squares to visit

In this post Bologna Guide tells you about the squares, surely the best meeting and aggregation places. Since ancient times these venue have been important to the citizens. A great way to know the city is to visit them, spend time and observe what happens. So have a look on the best squares to visit.

Every good guide defines the main square, Piazza Maggiore, as the true center of Bologna. But many forget to explain why it is so important. There are several reasons why this is a place loved by the Bolognese and knowing them will help travellers to deeply enter the spirit that animates the city. Surely in your city tour you will cross it, then slow down or stop, there’s a lot to see in Piazza Maggiore.

First of all, take a look at the magnificent façade of the Basilica of San Petronio. This is a beautiful example of Christian architecture. Moving in a clockwise direction you will see next to Palazzo dei Notai. Continuing in this way you will admire the Palazzo d’Accursio and the Clock Tower, Palazzo del Podestà and finally Palazzo Bianchi.
The square is bordered by a kind of step that Bolognese calls “Crescentone“, as it remembers a large Crescenta, a type of bread typical of Emilia Romagna. On the east side of Crescentone, some damaged stones are visible. These are the signs left by a tank of Allied forces that on April 21, 1945, freed the city, never restored in memory of that day.

Piazza Maggiore is one of the oldest squares in Italy 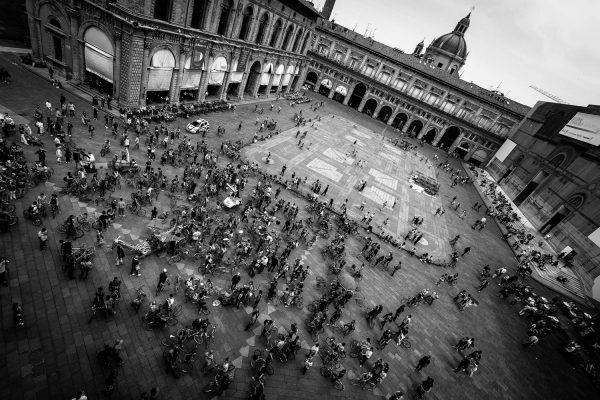 It was the year 1200 A.D.  when the City Hall decided to buy this plot of land and to tear down the houses and towers that were there. In this way a large space was created as place to host the market or as a meeting area. This was a sort of archetype because, since the fall of the Roman Empire, these activities had moved into Basilicas. In fact, some of the most important squares of Italy, such as the one of Florence and Siena, were built only after years or decades.

The most important events take places in Piazza Maggiore

One of the most important is surely “Sotto le Stelle del Cinema“, the film festival that enlivens the nights of July and August. The film festival is organized by the Cineteca di Bologna and it has become a habit for the citizens also is a good way to forget about the summer heat.

Over the years this has become one of the most popular venue in mid seasons, when the mild climate allows you to sit outdoors and enjoy the evening. The view of the church of San Francesco makes the stay evocative and the atmosphere is always pleasant and relaxed. On the opposite side of the church there are some wine bars and café but in the square it is not unusual to see groups of people and improvised musicians accompanied by the sound of the guitar tune old Italian songs. During the morning it is a perfect place to relax with the family and the comfortable benches offer a good seat for those who want to rest and enjoy the warmth of the sun.

Piazza Santo Stefano is one of the best squares to visit

The city is full of beautiful views and mysterious places, Piazza Santo Stefano is certainly one of the best points of interest. Its special shape and flooring give a unique look to the place, this makes it one of the most romantic places in Bologna.

The beautiful Complex of the Seven Churches looks like a vision while Corte Isolani and Casa Berti surround the square with their porches. Walking around, you might feel observed. Do not mind it, are just the heads that decorate the palaces. The Antiques Market takes place here for two days a month, on this occasion you will see an infinity of vintage objects of all kinds. We suggest you take a look, you will definitely find something special. 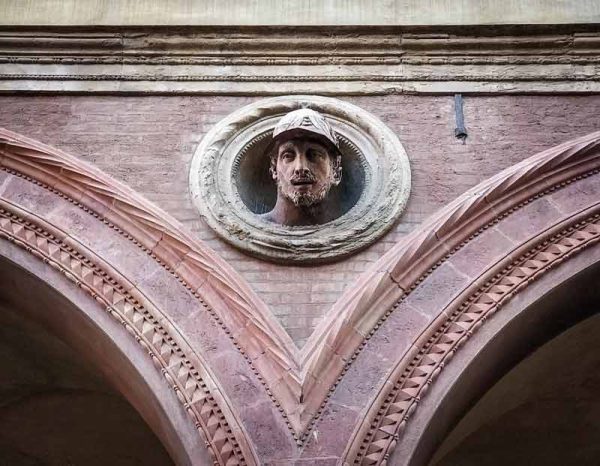 Piazza Verdi is the heart of the university zone

Named after the famous Italian composer Giuseppe Verdi, it often hosts cultural events. Anyone who has attended the University of Bologna knows it well, students gather here. Whether during the day, in pause between one lesson and the other, or in the evening this square is crowded with young people. In this vibrant area of the city is the location of the Teatro Comunale.

Stop in Porta Ravegnana square and take some pictures, it’s a thing to do!

Of course is to mention the square where the most famous towers of Bologna stand. The name comes from the old gate that was part of the first circle of walls. From this point passed the ancient Via Emilia and following it you could reach Ravenna. The statue dedicated to San Petronio dominates the scene and it greets the travellers with its austere appearance. Now the square is one of the main points of interest and a stop to take some photos is a must do for all tourists.